Earlier this week I was at the pediatrician with Cade (I know it seems like we’re there all the time.  We’re not, really — that’s just where I seem to find blog topics).  At the end of the exam, the doctor sent us to the lab for some blood work.  I was dreading it way more than Cade because he’s one year old, and ignorance is bliss.  The kid-friendly folks at the office had put a fish tank right at the entrance to the lab, which immediately caught his attention.  He was so amazed at those little swimmers that he kept pointing to the tank, looking at the other kids, and saying, “Look!  Sish!”  As in, “Can you believe how fantastic these things are?  And the dinosaur that blows bubbles?  Have you SEEN this magical aquatic wonderland?”  I smiled at his wackiness and looked around to the other kids.  It was then that I found my blog topic.

There was a huge wait at the lab, and we were crammed into the waiting area.  Some were Cade’s age and had no clue that a pointy needle was lurking around the corner.  The other kids were old enough to sweat it out, and looked nervously at the floor or at their parents.  All of the parents–ALL–had their faces buried in a smartphone.

I cast no aspersions here.  I have been totally guilty of the same thing.  For some reason, this image of scared kids and oblivious parents really got to me. What is it about the lure of the screen?  Are we catching up on work email while we’re away at the doctor?  Bored with the wait and checking Facebook?  Yearning to know who won gold in women’s beach volleyball?  After Cade tried to kiss a girl his age (ahem, more than once), she toddled over to me with a very pink storybook and asked me to read it to her.  Her dad was with her, absorbed in the phone.  In his defense, he was looking on You Tube for cartoons that might appease her during the wait.  Not a bad idea, and one I had considered myself before Cade was drawn in by the aquarium.  But is any screen as important as giving your kid a reassuring presence while they wait for the big jab?  These are all rhetorical questions — again, no judgment.

Being connected is such a blessing, but such a time suck.  It’s incredibly easy to get drawn into a black hole. One minute, you’re just going to check work 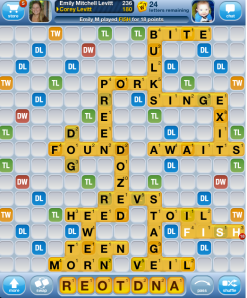 email. Then 90 minutes later you’re buying rain boots on Amazon.  Happens to me all the time.  The past few weeks I’ve been making a conscious effort to stay off the laptop and the phone when I’m home with the kids.  Some days I do better than others, but I’m trying.

Unplugging is harder than it should be.  But if it means the difference between helping Cade be brave during a needle stick or playing Words With Friends, it’s really no contest.

Now it’s night, and the kids are in bed.  To those of you with whom I have an active WWF game — it’s your turn.